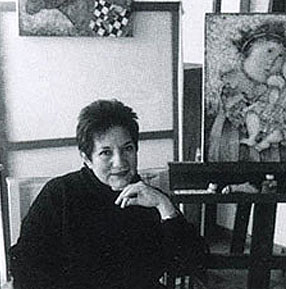 G. Rodo Boulanger born 1935 – Graciela Rodo Boulanger’s joyful scenes depict the pleasures of childhood in a childlike way. Born in La Paz, Bolivia, Graciela Rodo Boulanger was raised in an artistic environment. She studied piano with her mother, and it was at the age of 25, after having studied music in Chile, Austria, and Argentina, that she decided to devote herself to her creative expression, which is painting. Since her first one woman show in Vienna, 1953, she has worked in many other mediums beside oil painting: etching, lithography, water colour, pastel, sculpture and tapestry. Pursuing her dream to be both a great artist and musician, Rodo soon found that time would not permit the necessary devotion to both her passions. At 22, she turned all of her energy to painting. She studied etching and printmaking along with René Carcan under Johnny Friedlaender in Paris. She married a Frenchman, Boulanger, so that her public name became Graciela Rodo de Boulanger (Spanish) and Graciela Rodo Boulanger (French).

In 1966, her artistic ambition began to be realized when she published her first editions of engravings and first exhibited in the United States. In 1979, UNICEF designated her official artist for the International Year of the Child poster, and two of her tapestries were presented in the hall of the UN General Assembly. The Museum of Modern Art of Latin America, in Washington, DC, gave a retrospective of her oeuvre in 1983. In 1986, the Metropolitan Opera of New York commissioned her poster for Mozart’s The Magic Flute, and her paintings were shown by the Art Gallery of Lincoln Center. In 1993, the World Federation of the UN Associations chose one of her paintings to illustrate both a stamp and a limited-edition print on endangered species. More than 150 exhibitions of works by the artist Graciela Rodo Boulanger have been held on five continents of the globe